NYK Enhances Its Inland-Transportation Service in China for Finished Cars 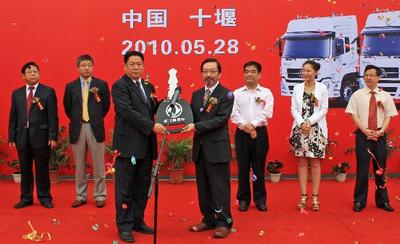 NYK Logistics (China) Co. Ltd. (NLC), a wholly owned subsidiary of NYK, has ordered 100 car trailers to meet the inland transportation needs for China’s car market, which is now the world’s largest. After this procurement, the company will have 700 car trailers at its disposal and will rank among the leading foreign-capitalized companies providing finished car transport service.

On May 28, a delivery ceremony for the 100 car trailers was held in Shiyan City in Hubei province, home to Dongfeng Commercial Vehicle Co. Ltd. (DFCV). Xu Tiansheng, vice president of DFCV, and Akihiro Fujii, president of NLC, joined a number of others in attendance. 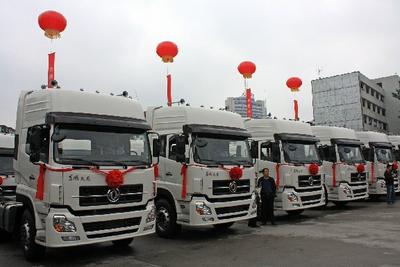 The NYK Group began transporting finished cars over land in China since 2003 and now provides transportation services throughout the country to Chinese, European, and Japanese auto manufacturers that produce cars domestically. Domestic sales of new cars in China has since surpassed 13 million units, and the resulting demand for inland transportation has thus expanded and is expected to continue to grow in tandem with increasing imports and exports. By purchasing more car trailers, NYK will be in a better position to accommodate transportation demand through use of its vast network throughout China.

NYK continues to further expand its domestic logistics services for cars and other goods in China to meet the needs of its customers.
* NYK Logistics (China) Co. Ltd.
NLC established its head office in Shanghai on June 1, 2000, the first comprehensive logistics company wholly owned by a Japanese company, and since then, NLC has set up branches in not only cities along the seacoast but also the inner areas of China. Moreover, the company, which has about 500 employees, intends to further expand its logistics service network.
The news on this website is as of the date announced and may change without notice.