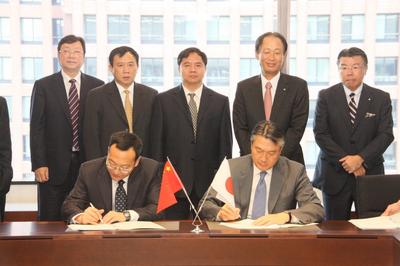 At the meeting, President Kudo expressed his gratitude for last year’s first contract for the transport of iron ore and his hopes for strengthening relations between the two companies. In response, Chairman Li emphasized his gratitude for the stable transport of iron ore that NYK currently provides and his desire for steadfast relations between the companies for their mutual growth, which is expected with the development of Hunan province.
Moreover, Vice-governor Chen mentioned that Hunan is a province that has seen rapid development, and is in great need of land transport to its inner regions, so he expressed his hope for the NYK Group to further enhance its wide range of services beyond the ocean transport of iron ore for Hunan Valin Iron & Steel Group Co. Ltd.
NYK continues to make every effort to remain at the forefront of transport services in response to increasing demand for the stable transport of natural resources and expand its domestic logistics business in China.
* Hunan Valin Iron & Steel Group Co. Ltd.
An iron and steel manufacturer formed by a government-coordinated merger of three iron and steel manufacturers in 1997. In 2009, the company produced 11.81 million tons of steel, the 10th largest volume in China for the year.
The news on this website is as of the date announced and may change without notice.