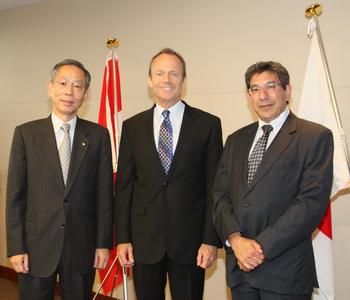 From left:
NYK Chairman Koji Miyahara,
Stockwell Day, president of the Treasury Board
and minister for the Asia-Pacific Gateway of Canada,
Jonathan T. Fried, Canada?s ambassador to Japan

Stockwell Day, president of the Treasury Board and minister for the Asia-Pacific Gateway, and Jonathan T. Fried, Canada’s ambassador to Japan, visited NYK’s headquarters in Tokyo, Japan, on May 20 to promote Canada’s Asia-Pacific Gateway Initiative* and meet with NYK chairman Koji Miyahara.

At the meeting, Mr. Miyahara expressed NYK’s keen interest, as a global comprehensive logistics company, in Canada’s Asia-Pacific Gateway Initiative, which will promote efficiency in the transportation network by having the private sector and Canada’s federal and provincial governments work together to facilitate global supply chains between Asia and North America. Moreover, he expressed his determination for further reinforcement of the close relationship between Canada and NYK based on the lengthy history the two have had ever since an NYK vessel first called the port of Vancouver in 1920.
NYK continues to make use of its advanced intermodal transport operations to provide better service as a comprehensive logistics company.
* Asia-Pacific Gateway Initiative: A project through which the private sector and Canada’s federal and provincial governments work together by taking advantage of Canada’s geographic location linking Asia, which has achieved rapid economic development, with the North American market. The project strives to consolidate a transportation infrastructure network that includes ports, roads, and airports from British Columbia, which faces the Pacific Ocean, to inland regions of North America, thus improving logistics from Asia to North America.
The news on this website is as of the date announced and may change without notice.