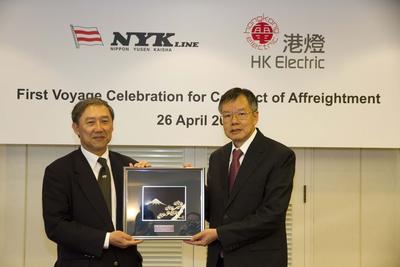 On April 26, a ceremony was held in recognition of the first call by bulk carrier United Serenity at the Lamma Power Station of the Hongkong Electric Co. Ltd. (HK Electric) on Lamma Island (Islands District, Hong Kong).

This contract for freight service by NYK covers the transport of steaming coal, mainly from Indonesia and Australia to Hong Kong, by a bulk carrier for a period of three years starting in 2010. This is the first long-term contract between HK Electric and NYK.

The ceremony was attended by Dr. W. K. Chu, General Manager (Group Commercial) of HK Electric, and Takao Ito, NYK corporate officer and chief representative for China. Mr. Ito expressed his gratitude to HK Electric for trusting in the transport service that NYK can provide as a partner to HK Electric in its first long-term contract. Moreover, Mr. Ito emphasized that efforts will be made for the safe and stable transport of this steaming coal.
NYK continues to make every effort to remain at the forefront of transport services in response to increasing demand for the stable transport of natural resources.
*  The Hongkong Electric Co., Ltd. (HK Electric)
Established in 1890, HK Electric is currently a leading electric power supply company in Hong Kong.
The news on this website is as of the date announced and may change without notice.