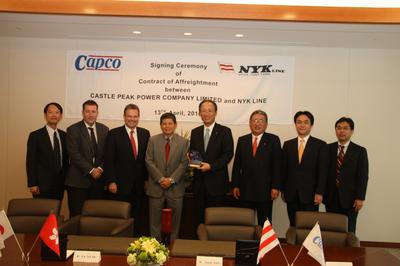 NYK has concluded a long-term contract with Castle Peak Power Co. Ltd. (CAPCO)* for the transportation of steaming coal.

This contract for the provision of freight service by NYK to CAPCO covers the transport of steaming coal, mainly from Indonesia to Hong Kong, by two bulk carriers for a period of up to eight years starting in April 2010.

NYK has been transporting steaming coal for CAPCO since the 1981 opening of CAPCO’s first power station. At the meeting after the signing ceremony, Mr. Kudo expressed his gratitude to CAPCO for the trust that it has placed in NYK over the 30 years, and emphasized the efforts that will be made for a further safe and stable transport of this steaming coal.