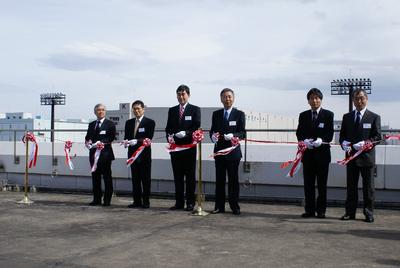 The solar cells have been installed at berths no. 6 and 7 of the Port of Tokyo’s Ohi Container Terminal. NYK leases these berths from the Tokyo Port Terminal Corporation for joint operations with subsidiary companies UNI-X Corporation and Nippon Container Terminals Co. Ltd. This marks the first time that CIS solar cells have been adopted at a domestic terminal in Japan. These large solar photovoltaic cells are environmentally friendly and as a whole system can generate up to 135 kW of electricity. After the installation of over 1,500 panels, the annual generating capacity will be about 130,000 kWh, which is about one percent of the electric power consumed annually at the terminal.

To mark the occasion, an inauguration ceremony was held at the terminal on April 1 and attended by a number of involved parties. At the ceremony, six people, including NYK Trading Corporation president Motoo Igawa cut a ribbon to celebrate the commencement of power transmission.

The NYK Group continues to make every effort to implement proactive environmental initiatives and measures.

*CIS solar cells: Copper, Indium, Selenium, or CIS, are the major components of CIS solar cells, which have been drawing attention as next-generation solar cells because they do not contain silicon, which is in short supply due to excessive demand. The CIS solar cell belongs to the class with the highest photoelectric conversion efficiency among thin-film-type solar cells. In particular, due to the excellent absorption of sunlight with a black element, the CIS solar cell is superior to the crystalline silicon solar cell that has a bluish element, which reflects a blue light. CIS solar cells made by Solar Frontier Ltd. (formerly Showa Shell Solar Co., Ltd.) were adopted.

Name: Photovoltaic Power Generation System
Installation Site: At the NYK Tokyo Container Terminal (No. 6 and 7 berths at the Port of Tokyo’s Ohi Container Terminal) on the roof of the gate wing in the no. 7 berth
Installation area: 1,317 square meters; 1,590 solar panels (671 mm x 1,235 mm)
Maximum power-generating capacity: 135.15 kW
Annual power generation: About 130,000 kWh;about 1% of electricity consumed at the terminal 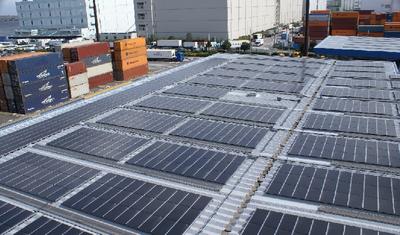