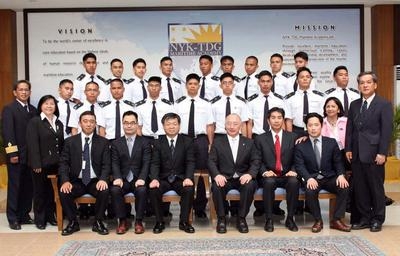 The NYK-TDG Maritime Academy (NTMA) held a preboarding ceremony on March 26 to launch onboard training for the first 116 students enrolled at the academy. NTMA is jointly run by NYK and business partner Transnational Diversified Group (TDG).* After completing one year onboard training on NYK vessels, students will acquire a seaman's certificate of competency, and be ready to start their careers as officers and engineers operating on the world's oceans.

The ceremony was attended by related parties, including NYK corporate officer Koichi Akamine, J. Roberto C. Delgado, founder & group chairman of TDG, academy staff members, and families of the students. At the ceremony, Mr. Akamine said, “I remember the day when I went on board for the first time. You must feel a strong sense of unease as you start to sail the oceans. May you return as better, more knowledgeable seafarers.”
The first students enrolled at the academy when it opened in June 2007. They have now completed their three-year academic requirements in line with the educational curriculum defined by NYK. The academy offers a wide range of maritime programs, including basic classes, training courses using operational simulators and an engine plant, and lectures on preparedness to be senior officers responsible for safe navigation. As a result of such a refined curriculum, at the nationwide Maritime School Assessment Program (MSAP) examination, held for students attending merchant vessel seamanship schools in the Philippines, most of the NTMA students were at the top of the class in academic performance. Eighty-one of the 92 schools throughout the Philippines took part in the MSAP. After completing three months of basic training on a cadet ship,** students will do a further nine months of training on NYK vessels, which amounts to a total of one year of onboard training.
NYK continues to focus on developing human resources that will be responsible for NYK’s future endeavors.
Outline of NYK-TDG Maritime Academy (NTMA)
Established:        June 3, 2007
Size:                    Number of students 120 per academic year: Marine navigation (60) Marine Engineering (60)
Instructors: about 30, including part-time instructors
Location:             Calamba City in the suburbs of Manila (about a one-hour drive from Manila)
Curriculum:         Four years (three year for academic lessons and one year for onboard training)
Mission:               To provide higher education to foster global seafarers, focusing on building an individual’s sense of humanity and the acquirement of practical maritime technologies.
*Transnational Diversified Group (TDG)
A business group established by Chairman J. Roberto C. Delgado. Business activities include vessel agent, seafarer supply, as well as maritime education, aviation, and logistics. TDG and NYK have maintained a cooperative relationship since the establishment of TDG in 1976.
**Cadet ship
NYK ocean vessels equipped with classrooms and living facilities, and staffed by specialized instructors
The news on this website is as of the date announced and may change without notice.