On March 19, 2010, Oita Maru, a new 300,000 DWT class ore carrier built at the Universal Shipbuilding Corporation, was delivered to NYK.

This new vessel is the first 300,000 DWT class ore carrier to have been ordered by NYK, and the first NYK bulk carrier to be equipped with an electronically controlled engine*. The ship will be chartered to the Nippon Steel Corporation as part of the subsequent eight years of a contract for the carriage of 1.2 million tons of iron ore each year mainly from Brazil. 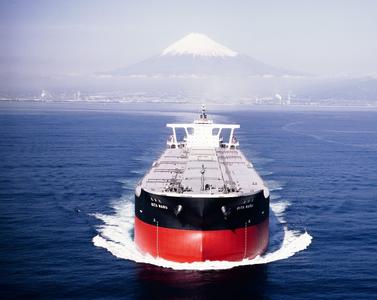 *Electronically Controlled Engines
An electronically controlled system optimally times fuel injection and the opening and shutting of exhaust valves, which enables the engine to operate at optimal combustion efficiency. In particular, this type of engine improves combustion efficiency because of the high level of fuel injection pressure that can be maintained even in the low-load range. Therefore, the improvement reduces the generation of NOx, soot, and smoke to a significant degree. In addition, since stabilized combustion is maintained, the reliability of the engine improves, which is also one of the beneficial features of this engine.