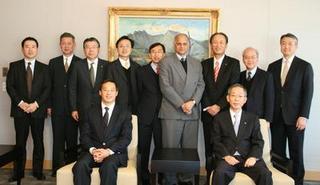 At the meeting, both chairmen commemorated the 40-year relationship between TCC and NYK, expressed their gratitude to each other for a partnership that has continued for so many years, and agreed to make efforts to further strengthen the bonds between the two companies. Chairman Koo also expressed his support of NYK’s innovative environmental activities.

TCC and NYK began their business ties 40 years ago with NYK’s charter of Silver Zephyr, a newly built handysize bulker. At the March 11 meeting, stories were recounted about former NYK chairman Takao Kusakari’s participation in the charter of this ship, and President Kudo’s duties in the operation of the ship shortly after he began working at NYK. NYK currently charters four capesize bulkers from TCC.
TCC was founded in 1917, so it has a long history, and has been one of the largest shipowners in Hong Kong. In fact, Chairman Koo has also served as the chairman of the Hong Kong Shipowners Association since November 2009.
Through this visit by Chairman Koo, NYK remains determined to further strengthening its relationship with TCC.
The news on this website is as of the date announced and may change without notice.