On March 5, NYK chairman Koji Miyahara and former chairman Takao Kusakari were conferred the Commander of the Order of the Crown (Commandeur de l'Ordre de la Couronne?by Johan Maricou, the Belgian ambassador to Japan, at the Belgian Embassy in Tokyo.

The commander class of the Order of the Crown is the highest decoration for commoners.

The conferral resulted from an appraisal of the NYK Group’s contribution to the friendly relationship between Japan and Belgium and the group’s comprehensive service in maritime and logistics areas in Belgium since the start of NYK’s first European liner service more than 110 years ago.
Chairman Miyahara expressed his gratitude by stressing Belgium’s importance to NYK, and this honorable bestowal encourages NYK to strive further and contribute more to the development of Belgium. Former chairman Kusakari, who currently serves as the president of the Japan–Belgium Society, expressed his gratitude by encouraging greater friendship between those in Japan and Belgium. 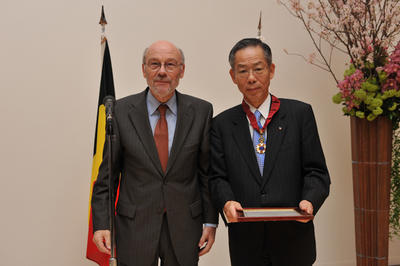 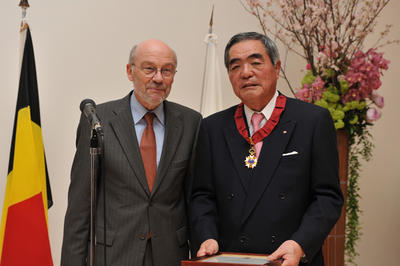 From left: Johan Maricou, the Belgian ambassador to Japan and former NYK Chairman Takao Kusakari
The news on this website is as of the date announced and may change without notice.