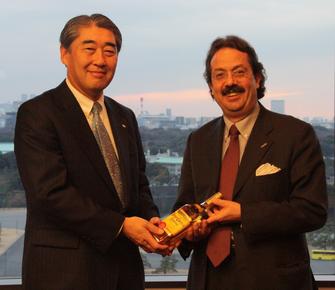 During the meeting, Mr. Hattori expressed his gratitude to Mr. Molinar for his understanding of the NYK Group’s business development in Mexico. In response, Mr. Molinar expressed his hope for a strengthening of the relationship between the two parties.
The NYK Group has maintained a solid relationship with Mexico ever since one of the company's conventional liners called the port of Manzanillo in 1925. Today, NYK containerships make calls at this port four times a week and NYK car carriers call
in Mexico by around seven times a month.
In addition to being a producing country blessed with a wealth of natural resources, Mexico is becoming known as a base for various manufacturing industries, and has recently received attention for its growing consumption.
The NYK Group will continue to explore business opportunities in Mexico, and the development of an even closer relationship with the country and its people.
The news on this website is as of the date announced and may change without notice.